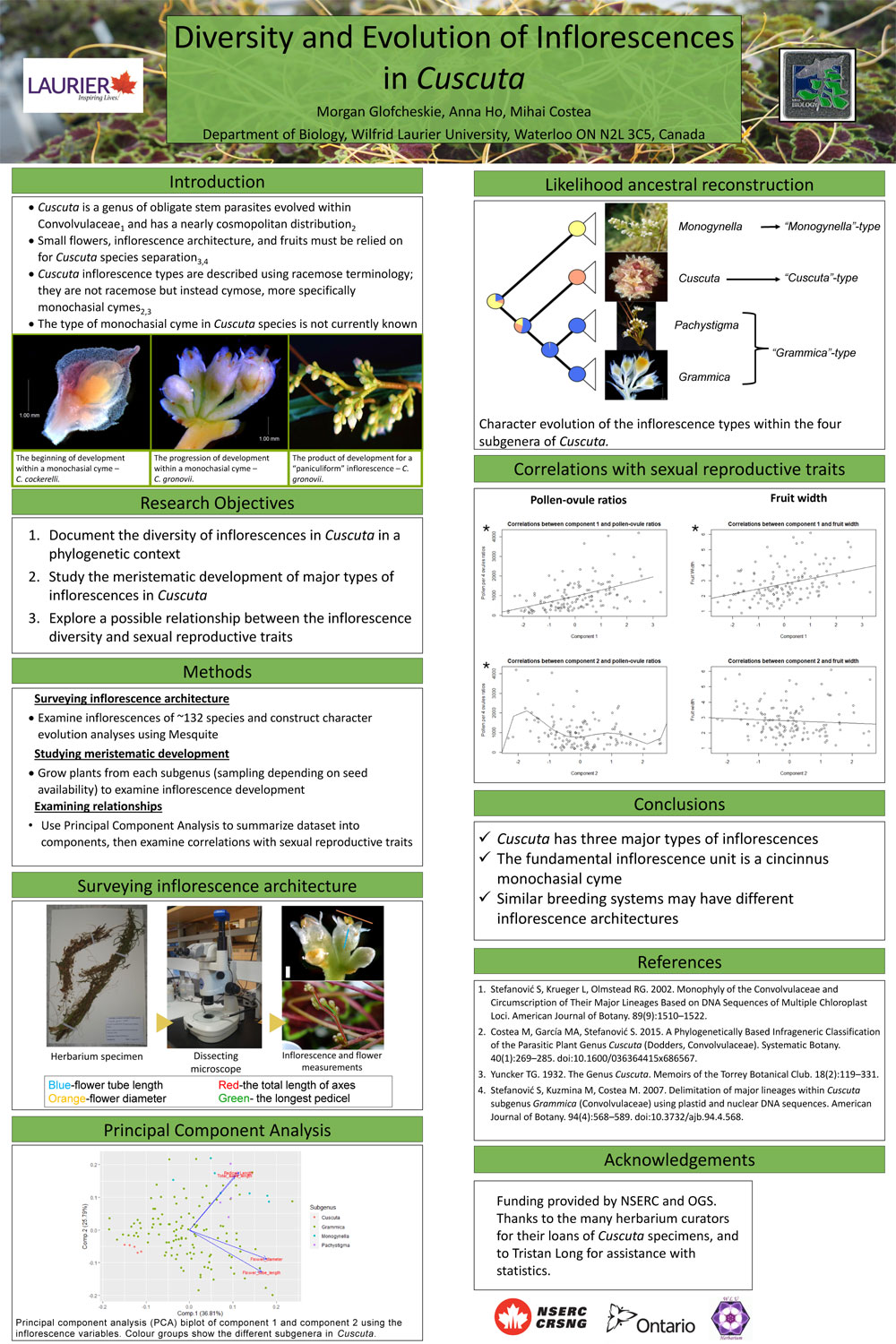 Cuscuta (dodder) includes ca. 200 species of plant obligate stem parasites with both ecological and economical significance. Inflorescences have been historically used in Cuscuta for species descriptions and identification keys, but no comprehensive study exists to date. The main objective of this study was to survey the diversity of inflorescences and to understand their evolution and possible form-function relationships. The inflorescence architecture of 132 Cuscuta taxa was analysed using herbarium specimens and eight species were grown to study their inflorescence development. Inflorescence traits were mapped into a genus phylogeny obtained from a combined analysis of nuclear ITS and plastid trnL-F sequences. To test the hypothesis that inflorescence architecture is connected to sexual reproduction, we analyzed correlations between inflorescence traits and previously published values for pollen/ovule ratios and flower diameter. Based on their development, three major types of inflorescences were observed. “Cuscuta type” is a simple, monochasial scorpioid cyme. In “Monogynella type”, cymes are compound monochasial scorpioid, but their longest primary axes have a prolonged vegetative growth giving the appearance of thyrses. “Grammica type” consists of compound monochasial scorpiod cymes with up to 4 orders of axes. Parsimony and maximum likelihood analyses inferred Monogynella as the ancestral type, while Cuscuta and Grammica were derived. Overall, the total length of axes exhibited a reduction trend throughout the genus evolution. Further morphological inflorescences types recognized in subgenus Grammica by analogy with racemose inflorescences, “racemiform /paniculiform”, “umbelliform/ corymbiform” and “glomeruliform” exhibited convergent evolution. Low correlations values were obtained only between pedicel length and flower diameter. No relationship was observed between pedicel and total axe lengths or between inflorescence traits and pollen/ovule ratios. These results suggest that the function of the inflorescence in Cuscuta is to prolong sexual receptivity and increase sexual assurance, and that breeding systems are not influenced by the inflorescence architecture.