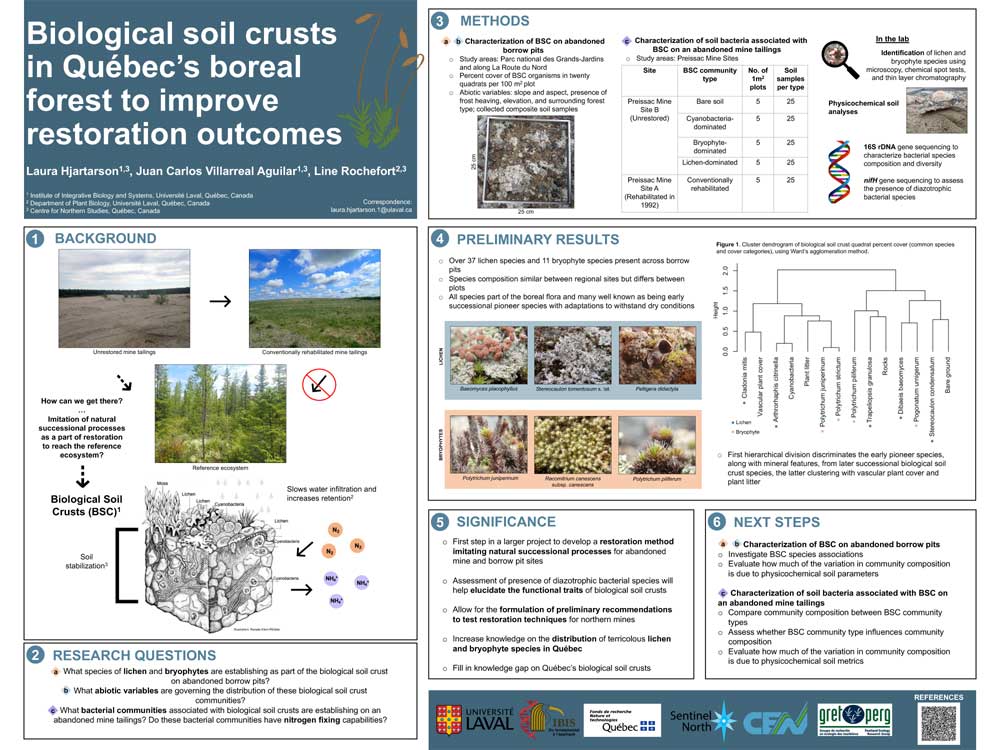 Resource extraction is driving economic, cultural, and environmental changes in northern Canada. Even after extraction activities have ceased, legacy impacts can persist, and restoration of extraction sites is critical in mitigating long-term impacts. In the search to find a holistic and cost-effective method of revegetation, the use of biological soil crusts (BSC) to accelerate primary succession is promising. BSC are communities that include lichen, bryophytes, and bacteria, that bind together with soil particles to form a surface crust. Taking into consideration their relevant ecological functions coupled with their ability to thrive in harsh environments, BSC are well positioned to facilitate the functional recovery of degraded ecosystems. The objectives of this project are i. to characterize the lichen and bryophyte species of BSC spontaneously establishing on borrow pits; ii. to identify the environmental factors governing the distribution of these BSC communities; iii. to characterize the bacterial communities and the presence of diazotrophic bacteria associated with BSC establishing spontaneously on abandoned mine tailings. BSC establishing on abandoned borrow pits, formerly used for road construction, were surveyed in Parc national des Grands-Jardins and along La Route du Nord. We are using 16S rDNA and nifH gene sequencing to characterize bacterial diversity and to assess the presence of diazotrophic bacterial species under bare soil and three types of BSC located on abandoned mine tailings, as well as under the bryophyte/lichen layer on rehabilitated mine tailings. Our results highlight the diversity of lichen and bryophyte species present as part of the BSC, the species associations that comprise the BSC communities, and the environmental variables shaping these communities.